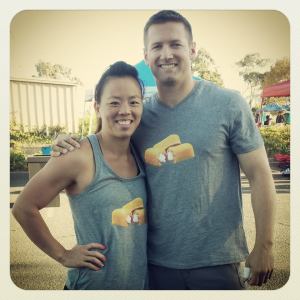 This past weekend, my partner, Alan, and I competed together at a local CrossFit competition.  It was an awesome day, with really awesome workouts that challenged not only our physical capacities, but our ability to work well together, too!  There were even Regionals athletes at the competition, which added to the intensity and nerves that day.

Alan and I were like two peas in a pod – We were seamless and smooth in every workout, and made our way into the Finals!!!  A moment that almost didn’t happen…

After WOD #1, we were sitting pretty in 5th place.  After WOD #2, we remained in 5th, and knew we had to do something great in WOD #3 to make it to the Finals, because only the top 4 teams made it.

Honestly, it was a surprise to us both, and I suddenly felt a feeling that I have never felt before.

Before I continue, let me rewind a bit…

I’ve always “wanted” to qualify for Regionals, and I’ve even toyed with the idea of maybe one day making it to the Games.  But, the farther I get in my journey, the more I realize that in the past, I really loved the IDEA of it more than actually doing it.

I said I “wanted” it, but I don’t think I really knew what that meant until now.

I thought that I wanted it.  I really did.  And, at the time, it seemed like I was giving 100%.  In hindsight, though, I was giving what I felt like I was good enough for.  Meaning – I always had “low expectations” at competitions and shot for the top half of the bunch…I was too afraid to go for top 5, or even top 10.  So, I performed that way – I competed at “top half” effort with “top half” desire and determination.  At the time, I thought that was “wanting” it.

In that moment, I FINALLY felt what it truly feels like to REALLY WANT IT!!!  And, it’s a feeling you really can’t understand or explain until you’ve felt it for yourself.

The Finals WOD was an Every Minute On The Minute Death By: 7 Thrusters (75/55), 7 Pull ups, and 7 Burpees.  Each teammate had to complete their own reps.  If one partner “died” than it was over for both.

During that workout, I experienced a burning desire that I haven’t felt before in a WOD.

So many times, I have pushed so hard, and then suddenly in the end I would wave the white flag.  The pain outweighed the want. That is what separates the champions from everyone else.  Champions are able to push through that pain.  They can go in to that deep, dark, horrible place, and charge through it like bulldozer without a second thought.  There’s no hesitation.  No doubt.

I literally had no doubts, no hesitations, and no fear. 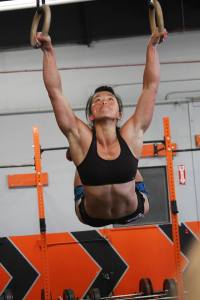 I often see the quote, “When you want to succeed as bad as you want to breath, then you’ll be successful.”  During the Final WOD, I finally experienced that for myself.

I wanted it SO bad, that the pain and lack of air honestly didn’t even register in my brain.

It was awesome.  I actually felt unstoppable.  I felt like a champion.

It was very much like the saying, “You never know how strong you are, until being strong is the only choice you have.”

I’ve been on a competitive-high this week, and I even find myself pushing harder in the workouts at my box.  Suddenly, I’ve realized that I really do have more to give, and I really am capable of making that podium! 😉

As I coach, I have been thinking about this whole experience a lot.  One of the most difficult things as a coach is letting my athletes experience things for themselves, learning from their own mistakes, and taking their own path. But, I also know that it will be much more valuable and life-changing that way.

I can talk and write until I am blue in the face, but until they experience it for themselves, it really isn’t going to have the same impact, nor will anything change until it is their OWN journey.

It’s just not the same talking about.  EXPERIENCE is the teacher.  Words are great, and can be very powerful, but until you have actually FELT it for yourself, you really don’t know.

I have been comparing it to my husband, Spencer.  I always thought I knew what being in love was.  I thought I loved before, and maybe I did, sort of, but then when Spencer came into my life, I suddenly realized what love was actually supposed to be.  I settled a lot, and thought I was only good enough for a certain level of men.  So, the crappy men in my life is what I thought love was.

Thanks goodness for Spencer!  Now, in hindsight, I am horrified at the thought of who I could have married instead.  But, I also needed to experience all of those sh***y relationships in order to appreciate Spencer.  I wouldn’t have been ready for him any other time in my life.  Those past relationships prepared me for him, and the timing was just right!  🙂

I think all of my competitions are very similar to my love life.  I wouldn’t have been ready earlier in my CrossFit career for that Final WOD.  I don’t think I would have pushed as hard.  I think just making it would have been good enough for me, and I would have thrown in the towel after 2 rounds.  And, while I wish I had given more in my past competitions and had different outcomes, they have still helped build me to this moment.  I think I finally snapped and got fed up with always being in the middle.

Bottom line – Don’t be afraid of experiences, and don’t regret any of them, good and bad, because even the bad ones serve a greater purpose in life! 🙂